The League of Extraordinary Women 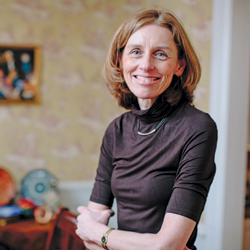 Dr. Anne Ruch photographed at the SewHope meeting base: the dining room of her Ottawa Hills home. The physician’s deep faith led her on a mission trip to Guatemala; her medical abilities drew her back countless times for outreach efforts among the country’s poorest, most afflicted communities in the Peten region.
I was born in Ireland and grew up in Queens. My parents never went past the 6th grade, but my dad was probably the smartest person I ever knew in my life. He was a huge believer in education. It was expected that you could do everything.
My mother always told me, make sure you’re independent.
It’s a dream job. You get to know your patients — it kind of spans the whole lifetime of a woman. Your patients become your best friends. And I think also, honestly, for me it’s almost like being in therapy, because you learn so much from people.
I was in church and the pastor announced one day that the church was going to Guatemala for outreach. It was 1998. I thought, as a doctor, I should go. The level of poverty was shocking. We were in Guatemala City, and we were going to a garbage dump, called la basura. We’re talking about the big things in life, and God, and getting to know each other, and all of a sudden we’re driving along and it started to stink. And you look out the window, and people are just lying on the floor looking half dead. And then you’re driving closer, and by the time you get to this place you just feel like you’re going to throw up. There were thousands of people living there. However you would picture hell, that’s what it looked like. I thought if there’s any God of any kind in this world, he did not create human beings to live like this.
They set us up to have a clinic at the recycling center next to this dump. There were just lines and lines of people. They will do anything to see you. So here I am, in a place I’ve never been before, I have absolutely no idea of their culture, no idea of their world view, I barely speak ten words of the language. I realized quickly that just making the trip on your own wouldn’t work.
At the time we decided to help we were working with a couple of missionary people in Guatemala that had their own little organization, and I think our idea was that initially we would support them. I wasn’t thinking at all what it would become. We picked on this region in Guatemala called Peten. Peten is about a third of Guatemala, and it was all jungle. It’s become one of those areas that’s completely deforested. It’s probably one of the most dangerous places in the world. And I’m so stubborn I said ‘We’ll go there.’
To give you an honest answer, I don’t think anybody does anything they don’t like to do. I think the truth is that I love this. I think that there is nothing better than being down there. [Guatemala is] probably one of the few things in my life I can say I have 100 percent trust that God is leading the way.